"The founding chapter of Alpha Delta Chi was started at the University of California at Los Angeles in 1925.  Their vision was to create a place where Christian women could participate in Greek life without compromising their beliefs, build strong friendships, and most of all, they wanted to create a place which would mirror Christ's love to their community. The sorority was originally named Areta, which means virtue. The sorority's purpose is to provide fellowship for Christian college women, to strengthen the spiritual lives of its members, and to be a testimony for Christ on each campus."

In the fall of 1962, a group of girls attending California State University, Long Beach began meeting with the guidance of the Alpha chapter and alumni. In February 1963, ten girls were pledged as the Zeta Chapter pledges, and initiated on June 7, 1963. The Zeta Chapter remained active for several years but was declared inactive in 1969. However, just five year laters God placed a new group of young women to recharter in 1974.The Zeta chapter remained extremely active for many years. They participated in numerous events such as Singspirations with Alpha Gamma Omega, prayer nights, outreaches, and formals. In 1995, the Zeta Chapter went inactive due to lack of interest on the Long Beach campus.

In the Spring of 2009, interest to recharter the chapter again rose, and a group of girls began to meet weekly for Bible study and prayer. After sending their letter of intent to the National Board, they were granted permission to recharter in the Fall of 2009. These beautiful ladies are pictured below (left to right): Lauren Zampieri, Christina Rosenberg, Emily Haven, Yen Ngoc Dahl, Bethany Feil, Jamie Perry. 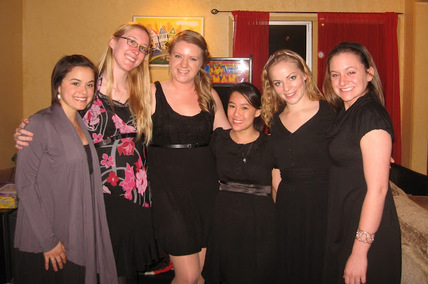 Colors: Flame and Blue
Flower: Gladiolas and Delphinium
Motto: "As in a Mirror"
Original Name: Areta, Greek for Virtue
Mascot: Lamb
Powered by